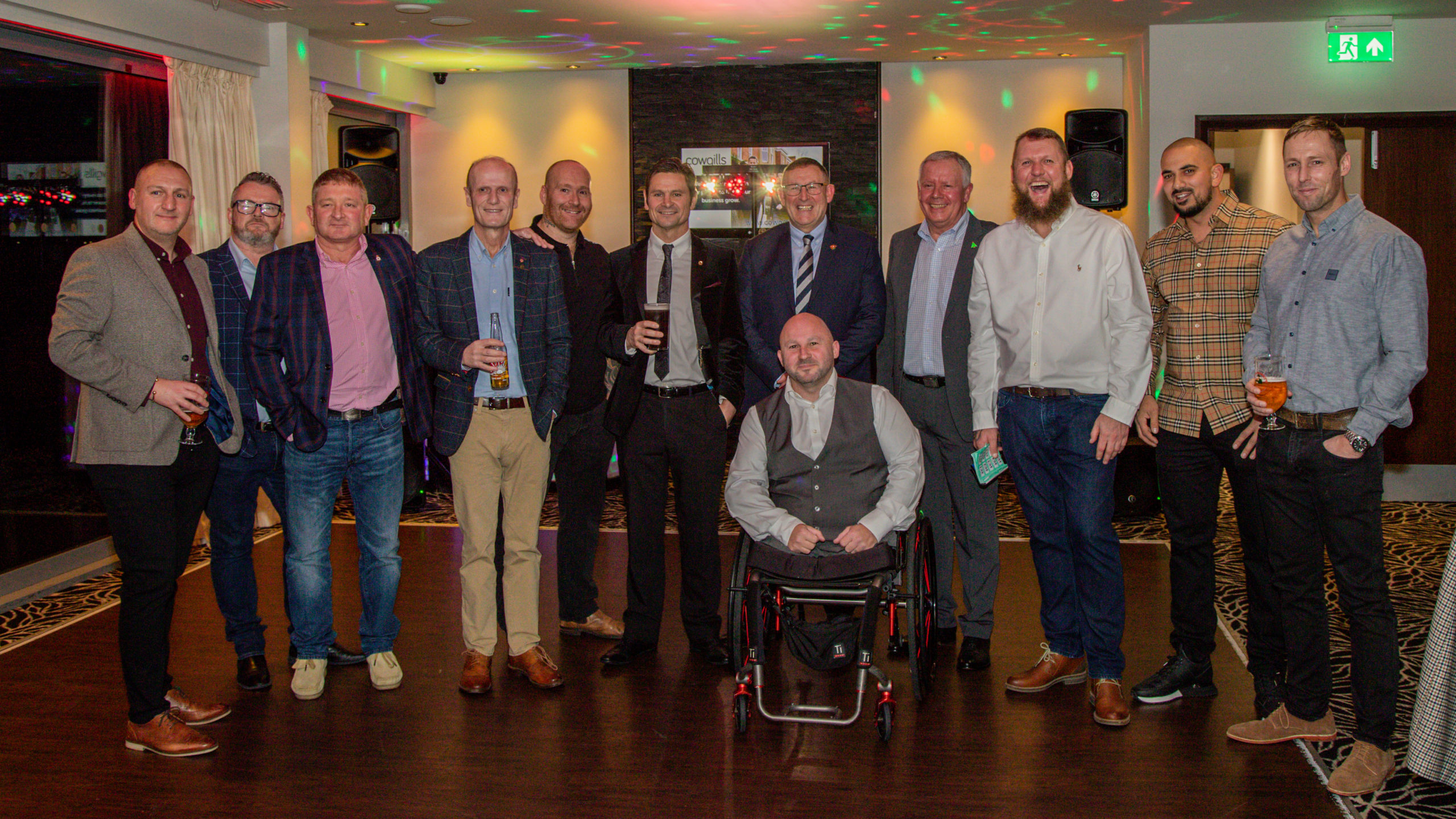 Friday 10th December 2021 brought the arrival of our first Veteran’s Christmas Ball. The venue was the Parkside Suite in Highbury stadium and it worked perfectly. As the 105 guests arrived, they were treated to a special welcome from Santa Claus himself before heading into the suite and straight to the bar of course.

As they checked the table plan, they became aware of each table being named after a local Soldier, Sailor or Airman who had lost their life. A fitting tribute to special people from our community over the generations.

A welcome was given by our organiser and Positive Pathways Co-ordinator Rick Clement before the meal was brought out. Many compliments were paid to this wonderful 3 course meal. It consisted of a lovely Honey roast root vegetable soup, which was then followed by a delicious Christmas dinner. Finally, no Christmas dinner would be complete without Christmas sticky toffee pudding, butterscotch sauce, and Baileys anglaise. Everyone thoroughly enjoyed their food and got to know the people on their tables.

At various times throughout the evening the Amazing Magician Michael Areola toured the tables performing some unbelievable card tricks. The look on peoples faces as he finished his performance was priceless.

After dinner Kevin Gray (now back in his suit after his earlier appearance as Santa), spoke about the Veteran’s Group and what it meant to him as well as what we hope to achieve in the future. Kevin finished by giving a toast to those our tables were named after which was extremely fitting.

This was followed by the raffle which had some amazing prizes such as a Fleetwood Town FC Poppy shirt as worn by the player for the Remembrance game, Executive match day tickets for a Fleetwood game, Cake hampers, Gin and much, much more. We raised an amazing £772.60 which will go towards helping Veteran’s in the community.

At this point there were some Thank You’s to be given by Rick,

Mike Ramsden who helped sponsor the event to make tickets much cheaper.

All the staff on the evening in the Parkside Suite who made it such a memorable night.

Carl Powell who sponsored the Magician.

Kevin Gray as the amazing Santa.

All the local businesses and people who donated raffle prizes.

To our Singer Kay Ahern who gave a discounted rate.

To all those who helped organise and assisted in the event.

Finally, all those who attended and made it such a special evening.

With all the formalities over it was time to hit the dance floor as our Singer and DJ Kay Ahern performed. Everyone joined in, but our stand out dancer of the night went to Tony Codling who showed off some serious moves. Kay’s performance was loved by everyone, and we partied the night away until it was time to go home.

I’d like to finish by pointing out at £15 a ticket you would struggle to have a better night. The price was kept low to allow more Veterans to be able to afford to attend, and thanks to generous people we achieved this. Normally something of this standard food and entertainment would be at least £40. We at the Community Trust want to make sure we make our events as accessible as possible to all Veterans.

If you’d like to hear about more of our Veteran’s events or find out when the next Ball is being held then please contact Rick Clement on 07949523089 or rick.clement@fleetwoodtownfc.com.